Bob Brinker did not talk about the stock market hitting a new bull market high this weekend.   I find that rather odd as some of us are very happy our portfolios are at record all-time highs!

I wrote an article for Seeking Alpha about the new highs on Friday.  You can read it at:

Here is a chart showing SPY, the exchange traded fund for the S&P500, making a new record high last week after including dividends paid. 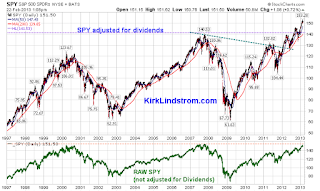 A caller asked Brinker what affect high "runaway" inflation would have on the stock market.  Brinker said this would be the worst case thing for stocks which is why you want a system that prevents this.  He then talked about how the Federal Reserve has a dual mandate from congress for stable inflation and maximum employment.


"The Board of Governors of the Federal Reserve System and the Federal Open Market Committee shall maintain long run growth of the monetary and credit aggregates commensurate with the economy's long run potential to increase production, so as to promote effectively the goals of maximum employment, stable prices and moderate long-term interest rates." 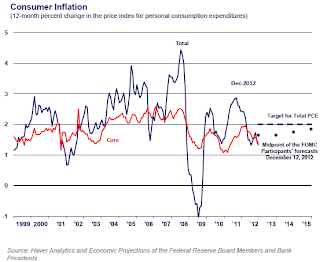 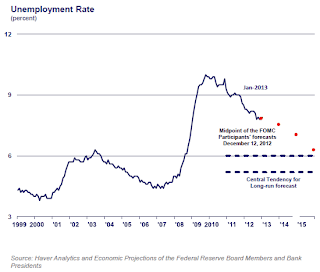 Kirk Here: Bob Brinker has been "Fully invested" in the stock market since March 2003.  His "balanced" model portfolio three is currently about two thirds in equities and one third in fixed income.  The other two model portfolios are 100% in equities.  My opinion, he takes excessive risk with these portfolios because if the market crashes, like it did in 2008 with him very bullish, he can screen calls and advertise his fixed income advisor newsletter.  For more, read:
Moneytalk with Bob Brinker Commentary for February 17, 2013 Radio Show
The following commentary is from my "Retirement Advisor" writing partner,  David Korn.

Brinker Comment:  The stock market indexes are all at or close to their 2013 year-to-date highs and for the most part the highest levels in several years. Those indexes have been strong year-to-date.  Having said that, there is a lot of bullish sentiment.   A lot of the indicators are showing a lot of bullishness.  Usually, at some point, that kind of over-zealous participation is very frequently cause for profit taking.  So if you see some profit taking coming into the market, you should not be surprised given the high level of sentiment in a number of indicators.

EC: It is relatively rare for Bob to make these kinds of clear cautionary remarks.  His comments about sentiment mirror the focus of the e-mail I sent to subscribers one week ago tonight.  He and I are on the same page on this issue.


Brinker Comment:  The big story this weekend is the sequestration that takes place on March 1, 2013.  That is when the automatic spending cuts take place.  This is basically an $85 billion mandatory spending cut program agreed to in the summer of 2011.  The President this weekend is announcing that he has an idea to reduce the deficit by $1.5 trillion over 10-years, which is a significant amount of money even though our deficit is high.  He wants to speak with the House to get this done.  On one side, people say they don’t want to cut spending by $85 billion because that will hurt the economy, whereas others say that’s a drop in the bucket and if you can’t handle this kind of cut, what can you handle?

If you can get the annual deficit down to 3% or less of GDP (total goods and services) you can probably grow your way out of the problem.  Our country was at a point where our annual deficits were 10% of GDP but now we are down to 6% which is a major step forward but is still way to high.  We have $16.5 trillion in debt and the only reason we are getting a pass on it right now is because interest rates are near zero, but we have to pay the interest on that.

Brinker Comment:  The President is talking about tax increases with the wealthy the target.  They got hit with the 2013 increases, the affordable care act and now the “balanced approach” discussed by the President with five areas at risk for tax increases which can include reductions in tax deductions.  Bob said we are not going to be talking about marginal rate increases because that battle was fought in December.  But reductions in deductions are on the table.  Bob discussed the various potential areas for increasing tax revenue.

Mortgage Interest Deduction. One of the things that is inherent in changing the mortgage interest deduction is taking the money out of the pocket of high earners and the way you can do that is eliminating part of the mortgage interest deduction some high earners tend to have large mortgages (if they have one). Right now, there is a cap on mortgage interest for mortgages over $1 million.  They could reduce that cap as it is currently a high level which is a gift to high earners.  If they reduced that they would raise tax revenue.  Another mortgage-related deduction on the table is the second home deduction which is very valuable for high earners who have a vacation home.  And finally, there could be a “means test” used to determine whether you make too much in earnings to allow you to take the full mortgage deduction.

Deduction for State and Local Taxes.  Right now you can deduct your real estate taxes, your sales taxes, etc. for those who itemize.  The last year we have numbers for this is 2010 and taxpayers deducted $260 billion in state and local taxes.  If you took 20% of that, you would increase revenue by $52 billion a year.  Once again, this would be skewed to high earners.  The camel’s nose on this one is already under the tent because they have already eliminated the state and local tax deductibility for victims of the alternative minimum tax.  So keep an eye on this one.

Charitable Deductions.  The President has already proposed a cap on the deductions to charity.  They could easily set an income threshold like they do for medical expense deductions.

Employee-Sponsored Health Care Benefits:  There are 150 million beneficiaries of this.  If you work for a company that pays for all of your health care, you get that benefit without being required to pay taxes on that benefit.  If your neighbor pays his own premium, he doesn’t get a tax break on it.  The average premium per family is $16,000.  If they made that taxable, that would be a tremendous amount of money.  The joint committee on taxation estimates this is $150 billion annual revenue!

Municipal Income Tax:  Right now, municipalities are benefiting from near zero rates.  They could cap the amount of income you can earn tax free.

Bob said the overriding theme in all of the ways the government wants to bring in revenue is to go after the high earner.

EC: Republican Senator John Barrasso said today that the country should be prepared for sequester because it is going to happen on March 1st.  Read more here: http://tinyurl.com/a2pv6kt

Check out these portfolios at record highs: 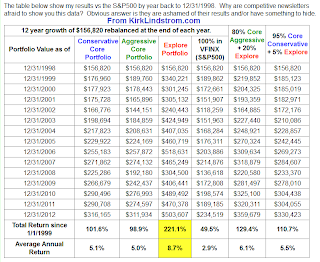 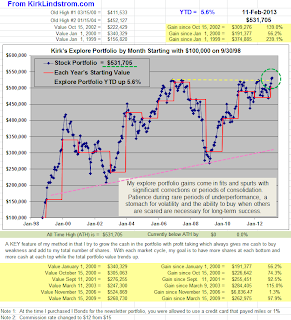 Posted by Kirk Lindstrom at 12:40 PM No comments:

Note, when the market was last at its all time high in 2007 Bob Brinker also was fully invested and he had model portfolio #3 at two thirds equities and one third fixed income.  (More explained below these graphics)

Click images to see full size views.
Click to Subscribe to Kirk Lindstrom's Investment Letter
Bob Brinker completely missed the 2008/2009 bear market and so he didn't have funds to buy after the market fell 57% from the peak.  You can see from my portfolios below, by rebalancing. I took profits at the top in 2007 and my core portfolios were at new all time highs by the end of 2010, over two years ago!  They are even higher today.

I believe it is hubris to believe you can time the market well enough to miss bear markets.  Brinker, recommending QQQ at the top of the NASDAQ bubble and issuing a "gift horse buy" at the top of the 2007 bull market is proof of that.

I believe taking profits when up once a year at a minimum to have funds to buy when low makes far more sense then "market timing."   I was named one of the "Timer Digest" top ten long term timers at the end of 2012 and I was listed on their most recent bi-weekly update of top timers. It is a great honor but I only rely on timing for a small part of my newsletter advice.

Posted by Kirk Lindstrom at 8:17 AM No comments: