Today Bob Brinker gave his advice to president Obama and the congress about how to help the economy. His advice was

#1 Cut corporate tax rate from 35% to 25% so US corporations are paying the same taxes as most other industrialized nations.

#3 Postpone plan to increase taxes in January.  He got pretty worked up over this:  "This is no time for a country that is dealing with a slow growth economy like this and a housing malaise..... to be raising taxes.... NO TIME TO BE RAISING TAXES."

Brinker says all three would be positive for the economy.
FWIW, I agree but I would settle for #1 and #2 and let the president save face by increasing taxes on those making over $250,000 in exchange for cutting the corporate tax.  That would bring more jobs into the US in exchange for a higher tax on those who already have a good job.

Email ThisBlogThis!Share to TwitterShare to FacebookShare to Pinterest
Labels: Taxes 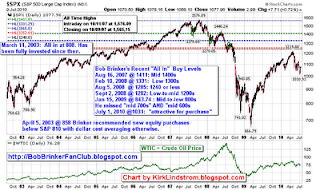 Brinker returned to "fully invested in March 2003 and has stayed that way ever since.
Bob's guest today was Suzanne McGee, author of the book Chasing Goldman Sachs: How the Masters of the Universe Melted Wall Street Down . . . And Why They'll Take Us to the Brink Again

.
You can listen to the Sunday Moneytalk broadcast for free at the KGO Archives (1 - 4 PM PST) for the week following the show.  After listening, the ReplayAV software will let you copy the file from your computer's memory to a permanent place on your hard drive to upload to a portable MP3 player.
Posted by Kirk Lindstrom at 3:05 PM 6 comments:

The top CD annal percentage yield (APY) this week is at Pentagon Federal Credit Union for a 7-year certificate of deposit currently paying 3.51%.   From my survey of six months ago, this same certificate was paying 4.5%!
With rates so low, banks will try to sell you their annuity products. Make sure you read my article: Beware of Annuities.

The table below shows the best CD rates for other terms. If that table is hard to read, then try Very Best CD Rates.


With rates so low, banks will try to sell you their annuity products. Make sure you read my article: Beware of Annuities

Related information:
Posted by Kirk Lindstrom at 10:00 AM 2 comments: