The best CD rate under 1 year is 3.75% at Wachovia Bank. From the Highest CD Rates Survey at forbestadvice.com, the best CD rate is 5.00% at Capital One Bank for Terms of 7 and 10 years. Vanguard Prime Money Market Fund currently pays 2.96% but there is no FDIC.

Be careful when you go to your bank and ask for their best rate. They will often use that as an excuse to sell you an annuity that sounds good on the surface, but is far more profitable for them due to the higher fees.

Make sure you read the Article: Beware of Annuities
Posted by Kirk Lindstrom at 9:35 AM No comments:

The 60 day moving average (60-DMA) of the CBOE Equity Put/Call ratio ($CPC) is currently at a record high of 1.10 as shown on this chart. 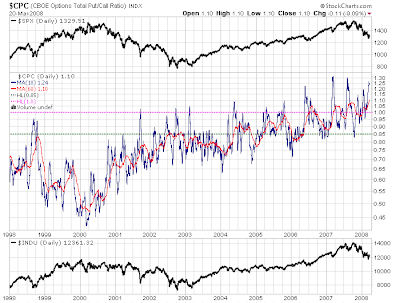 "The 60-day put/call ratio remains in bullish territory as the new year begins."

In July, 2007 Marketimer, Bob Brinker predicted a "move into the S&P 500 Index 1600's range as we move forward....."
.
Kirk Comment: Most of us who know nobody has ever timed the market successfully over the long term HOPE 1256,98 was just a "detour" on the road to 1600s.
.
In August, 2007 Bob Brinker said: "We rate the stock market as attractive for purchase on weakness that occurs in the area of the S&P 500 Index mid-1400's. Above that level, we recommend a dollar-cost- average approach."
.
Brinker repeated the "mid-1400's" buy signal in September, October, November and December.

On an intraday basis, the S&P500 and the NASDAQ Composite have been down as much as 20.2% and 24.7% respectively while the DJIA has "only" been down 19.4%, just shy of the 20% decline required for an "official" bear market definition some use.

See: The Yield Curve Spread as a Market Predictor

This sort of a spread usually signals a strong stock market ahead just as the inverted yield curve in late 2006 and early 2007 correctly predicted the recession or near recession we are in now.


Since October 15, 2000 when Bob Recommended QQQQ to his investors for up to half their cash reserves, my newsletter "explore portfolio" is up 41.7% while Brinker's QQQQ is down 46.4%!!!

You can see why I recommended and continue to recommend my Explore Portfolio over Bob's QQQQ.

If you want to know what I have been buying in this period of weakness with my profit taking dollars from selling when the market was higher, Subscribe to Kirk's Investment Newsletter TODAY and get the March 2008 issue FOR FREE!

Posted by Kirk Lindstrom at 11:26 AM No comments:

Bear Stearns May Sell Itself to JP Morgan (Chase)

Bob Brinker is talking about this amazing story as I type. Below are some article links for more information. You can find more current stories by typing some of the keywords like "Bear Stearns JP Morgan" into a search engine.

Bob Brinker liked the market for lump sum purcase in the "mid 1400s" and again in the "low 1300s." The markets are currently in the "high 1200s" so he must really like them now for purchase.

From Bob Brinker According to Mark Hulbert by Honeybee:

The article shows charts and gives more information on what to look for in a follow-through day.

TEFQX: This is Bob Brinker's Business-to-business (B2B) internet fund recommendation in Feb 2000 Marketimer that he continues to have on HOLD. 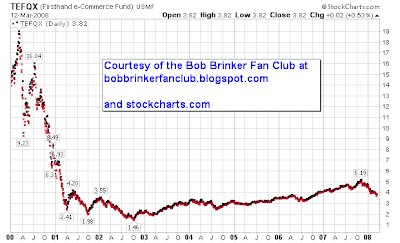 Posted by Kirk Lindstrom at 8:02 AM No comments:

Dan Ariely is the Alfred P. Sloan Professor of Behavioral Economics at MIT's Sloan School of Management. His 304 page book "Predictably Irrational: The Hidden Forces That Shape Our Decisions" (Hardcover) was released on February 19th by HarperCollins.

Irrational behavior is a part of human nature, but as MIT professor Ariely has discovered in 20 years of researching behavioral economics, people tend to behave irrationally in a predictable fashion. Drawing on psychology and economics, behavioral economics can show us why cautious people make poor decisions about sex when aroused, why patients get greater relief from a more expensive drug over its cheaper counterpart and why honest people may steal office supplies or communal food, but not money. According to Ariely, our understanding of economics, now based on the assumption of a rational subject, should, in fact, be based on our systematic, unsurprising irrationality. Ariely argues that greater understanding of previously ignored or misunderstood forces (emotions, relativity and social norms) that influence our economic behavior brings a variety of opportunities for reexamining individual motivation and consumer choice, as well as economic and educational policy. Ariely's intelligent, exuberant style and thought-provoking arguments make for a fascinating, eye-opening read.

You can purchase the book at this link at the current sale price of only $14.27.

.
Posted by Kirk Lindstrom at 9:06 AM No comments:

Today the S&P500 closed at a marginal new low on lower volume than the last time it was near this level on January 22. Thus it meets Bob Brinker's conditions for a successful test of the prior low.

Click the charts courtesy of stockcharts.com to see them in full size. 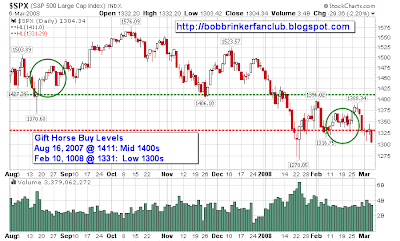 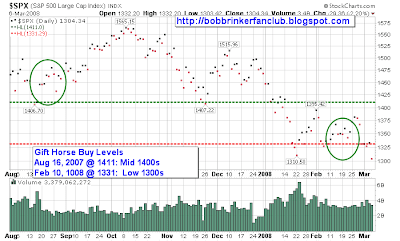 Only time will tell now if this is a good indicator.

Posted by Kirk Lindstrom at 4:16 PM No comments: 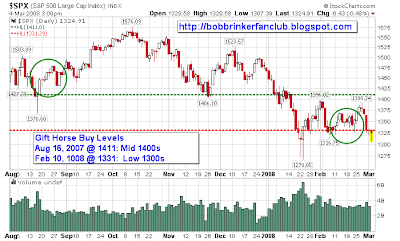 Did the "Bottom Bell" ring at your house? Did you grit your teeth and buy through your fear today? I bought stock today.

"Any further testing of the area of the correction lows, which we expect to be close to the current S&P 500 Index level (1411), is regarded as an additional buying opportunity for subscribers looking to add to stock market holdings."

"Marketimer expects the S&P 500 Index to register new historic record highs as we move forward into next year."

Visit our Facebook Bob Brinker Discussion Forum at "Investing for the Long Term" to ask questions or discuss this article.

Disclaimer: I own SPY (the Exchange Traded Fund for the S&P500) in my IRA. Also, I did some buying of an "explore stock" from my newsletter "Explore portfolio" today with money from taknig profits when the market was higher.

You can see from the chart the market probed the January 22 closing lows on much lower volume. Even more exciting, it finished the day with a very bullish "Dragon Fly doji" 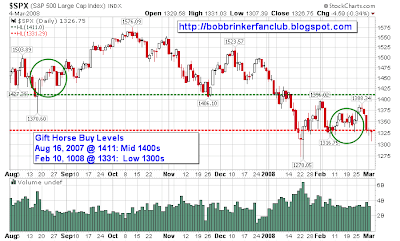 The reversal implications of a dragon fly doji depend on previous price action and future confirmation. The long lower shadow provides evidence of buying pressure, but the low indicates that plenty of sellers still loom. After a long downtrend, long black candlestick, or at support, a dragon fly doji could signal a potential bullish reversal or bottom. After a long uptrend, long white candlestick or at resistance, the long lower shadow could foreshadow a potential bearish reversal or top. Bearish or bullish confirmation is required for both situations. 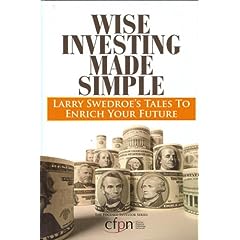 Larry Swedroe is a principal in the firm, Buckingham Asset Management. He graduated from New York University with an MBA in finance, and is the author of The Only Guide to a Winning Investment Strategy You'll Ever Need, What Wall Street Doesn't Want you to Know and four other books including his latest book "Wise Investing Made Simple: Larry Swedroe's Tales to Enrich Your Future (Hardcover)"

"We remember a good story long after the facts are forgotten. Larry Swedroe tells stories that will change your beliefs-and make yourself a better investor." --Weston J. Wellington, Vice President, Dimensional Fund Advisors

"Larry Swedroe's book, Wise Investing Made Simple: Larry Swedroe's Tales to Enrich Your Future, is the best one he has yet written. In a series of stories tha tare clear and simple yet profound in their meaning, Mr. Swedroe explains how modern financial markets really work and how any investor who comes to understand this will be able to make more informed and better investment decisions. I highly recommend this book for all levels of investors-as well as their advistors." --W. Scott Simon, author of The Prudent Investor Act: A Guide to Understanding

Click the link to order "Wise Investing Made Simple: Larry Swedroe's Tales to Enrich Your Future (Hardcover)" for $24.95. The book is eligible for FREE Super Saver Shipping on orders over $25.
.
Posted by Kirk Lindstrom at 9:17 AM No comments: