This weekend KGO radio in San Francisco played spliced together parts of past Moneytalk shows with Bob Brinker answering general questions. Reports say KGO did not announce it was a "best of Bob Brinker show" like they do for the other shows they produce themselves.
This inspired us to write a New  article:
Brinker's Rules on Investing - Become Your Own Money Manger
Feel free to add to that list here if you know of any "rules" we left off.

This weekend Bob Brinker said the markets were "volatile."  I summarized the market volatility below.  Other than that, Brinker didn't have much to say about the stock market nor his bragging just weeks ago when the S&P500 was at 1290 and he was buying.   See:
August 6 Market Update and Bob Brinker's Recent Advice to not Sell
Bob Brinker Buy Levels in graphical form 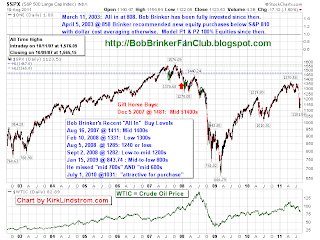 So, despite all the noise from Brinker about a 1030 buy for the market, he was fully invested at the very top at 1576, issued a "gift horse" buying opportunity in the mid 1400s and has been calling "buying opportunities" all along yet the market is still down 28.7% from four years ago and down 18% from his recently bragging about buying.  ALL WHILE FULLY INVESTED IN STOCKS SINCE 2003!
Brinker's guest was Bob Lutz, author of the book, “Car Guys v. Bean Counters: the Battle for the Soul of American Business


In 2001, General Motors hired Lutz out of retirement with a mandate to save the company by making great cars again. As vice chairman, he launched a war against the penny-pinching number-crunchers who ran the company by the bottom line, and reinstated a focus on creativity, design, and cars and trucks that would satisfy GM customers.

Best CD and Savings Rates:   Best CD Rate Survey
Bob Brinker recommends CDs on his show for those who don't want to take any interest rate risk with GNMAs or any other bonds.  That is bonds will lose net asset value if interest rates go up.
Kirk Lindstrom's Investment Letter
Your 1 year, 12 issue subscription will start with next month's issue.

We are getting word that Bob Brinker sent out a "special bulletin" to subscribers of his "Marketimer" newsletter as well as those who don't subscribe.
A subscriber tells us that when they logged in they were told "there is no bulletin."
We got an email last night asking us "Does anyone know what Brinkers 8/9/11 bulletin said?" We assume this means news of the bulletin went out to non-subscribers and/or expired subscribers too.
Why send out a bulletin to paying customers then not offer them some insight into the market after it has fallen drastically since telling your audience at much higher levels that you were not selling?


"Of course, the market is now at 1292, a couple of percent higher than when that call came in at the end of June. So this is what happens. If that individual would have sold out at 1270 at that time, he would be faced now with either sitting it out or re-entering at a higher level."   July 31st Advice

We can see why you would advertise a special bulletin to those who did not renew your newsletter. You can hope they will pay again to renew just to see if you advised selling stocks after a huge decline.

Brinker sold AFTER the 1987 Bear Market decline so he has a history of selling near bottoms after big declines. See:

What we don't understand is why he would risk reminding his current subscribers that he has had nothing to say since bragging about not selling with the S&P500 at 1292 less than two weeks ago? See:
Click images to see full size graphs
Posted by Kirk Lindstrom at 8:44 AM 12 comments:

July 31, 2011 Moneytalk Update:
Bob Brinker remains fully invested. Last Sunday, July 31, 2011, Bob Brinker said it was amazing how the stock market had taken all of the debate over the debt ceiling in stride. He said the S&P 500 was "setting about 5% below its closing high for the year, which is truly amazing."

Of course, the market is now at 1292, a couple of percent higher than when that call came in at the end of June. So this is what happens. If that individual would have sold out at 1270 at that time, he would be faced now with either sitting it out or re-entering at a higher level.

Bob Brinker went on to say he was not part of the "panic crowd"
New article August 6 Market Update and Bob Brinker's Recent Advice to not Sell
August 6, 2011 Market Update:


August 8 Market Update:
Posted by Kirk Lindstrom at 7:15 AM 6 comments: