Inflation, Gold and the DOW

Bob Brinker has been negative on gold as an investment since the 1990s, claims inflation has not been a problem and the falling dollar has not been an issue since we buy things in dollars. 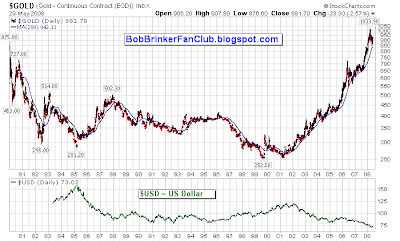 Cutting the Fed Funds target rate from 6.50% in January 2001 to 1.0% in June 2003 may have inflated the US stock market out of its bear market when priced in dollars but it had consequences.

This chart of the DOW Jones Industrial Average (DJIA) priced in gold shows the markets are not as healthy as one might think due to the decline of the US dollar. 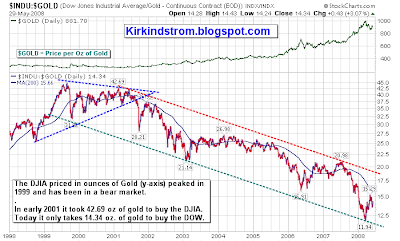 When you price the markets in a currencly like gold that reflects inflation, such as gold, the markets remain in a bear market! This may explain why the US consumer feels she is continously squeezed despite claims from Bob Brinker that inflation has not hurt the consumer.

Cutting interest rates to get the US out of a recession may have worked but the inflation in commodites and devaluation of the US dollar it caused has caused pain for the US consumer. This pain is often blamed on president Bush who took office just as the DOW/Gold ratio broke out of the "symetrical triangle" pattern. I think it also explains why a populist like Barak Obama with the most liberal voting record in the US Senate has a good chance to win the upcoming presidential election.

The Bible for technical analysis, Technical Analysis of Stock Trends, by Robert Edwards and John Magee, says about 75% of symmetrical triangles are continuation patterns and the rest mark reversals. The "return to the apex" of the Gold/DOW ratio in late 2001, early 2002 confirmed the technical breakdown of this chart pattern. For more information, read chapter eight "Important Reversal Patterns - The Triangles."

Request Invitation to FREE facebook group "Investing for the Long Term" where you can participate in the "Bob Brinker Discussion Forum.

Posted by Kirk Lindstrom at 8:31 AM

Email ThisBlogThis!Share to TwitterShare to FacebookShare to Pinterest
Labels: Gold, Inflation, US Dollar

What we Are Reading

Good reading for this holiday weekend!

Be safe everyone and happy Memorial Day

Posted by Kirk Lindstrom at 11:24 AM No comments:

Email ThisBlogThis!Share to TwitterShare to FacebookShare to Pinterest
Labels: Reading

Today the Federal Reserve released the minutes from its last meeting. In these minutes they said cutting rates from 2.25% to 2.00% at the last meeting was a "close call" and they think future rate cuts are unlikely even if the economy contracts.

The FOMC also released their updates for GDP to rise between 0.3% to 1.2% this year. This is a reduction in their prior forecast of 1.3 to 2% GDP growth for 2008.
They also raised their forecasts for the unemployment rate, CPI or "headline inflation" and core inflation as measured the price index for personal consumption expenditures, or PCE, that Bob Brinker has discussed on his show.

From An Alternative To Bob Brinker's Inflation Outlook:

Posted by Kirk Lindstrom at 11:34 AM No comments:

This weekend Bob Brinker said he didn't buy into the conspiracy theories that some have which say real inflation is much higher than officially reported. This was no surprise since Brinker is on record of predicting low inflation while saying a higher price for oil is deflationary. From March Inflation Up on Higher Energy and Food Costs:

Kirk Comment: An item I see missing from CPI calculations is the decrease in quality of customer service. You may get an item 50% cheaper these days but how much do you save if you value your time and spend hours on the phone with people in other countries to get information you should not have had to ask for? It is probably not a big deal until you add up all the time you could spend on the phone disputing bills to getting help for products that don't work rather than just live with it because it is not worth the hassle.

J. Lewis wrote: "I have just ordered this book, but based on the excerpt published in this month's Harper's, it is a must-read for anyone concerned about our nation's economy and our position in the world. It appears to be lucid and well written, and it is not a political screen. (The bad guys are every administration in recent memory, not just the Bushes.)

Simply put, over the past 30-40 years, various administrations have changed the statistical bases of economic analysis. If consistent standards were used, inflation and unemployment would be shown to be much higher and the GNP much lower than we believe. We are losing the economic battle, but do not understand the extent to which we are because we have succeeded in lying to ourselves."
Posted by Kirk Lindstrom at 6:40 AM 1 comment:

Email ThisBlogThis!Share to TwitterShare to FacebookShare to Pinterest
Labels: Inflation

Nice web site: World Market Graphs at a glance
Posted by Kirk Lindstrom at 9:09 AM No comments:

For the S&P500, the correction from intraday high to intraday low was 20.2% and we are currently 10.3% off the peak. Details below for the S&P500, DJIA and NASDAQ markets for intraday and closing numbers.

What did you do in the correction? Did you take profits when the markets were near all time highs so you could buy on the recent market weakness?

This means the correction from intraday high to intraday low is 20.2% and we are currently 10.3% off the peak.

The decline from the high to the low on a closing basis is 18.6%
.
DJIA Chart (Using Intraday prices):

This means the correction from high to low has been 19.4% and we are currently 8.6% off the peak.

The decline off the high on a closing basis has been 17.1%

This means the correction from high to low has been 24.7% and we are currently 13.4% off the peak.

The decline off the high on a closing basis has been 24.1%

Subscribe NOW and get the May 2008 Issue of Kirk Lindstrom's Investment Letter for FREE! ! (more information)

Posted by Kirk Lindstrom at 2:03 PM No comments:

Click pictures to order.
Posted by Kirk Lindstrom at 8:11 AM

We posted Bob Norton's shadow timing model update at The Bob Brinker Fan Club on May 1, 2008.

This is a Special Report by Bob Norton for the Bob Brinker Fan Club.

Posted by Kirk Lindstrom at 2:14 PM No comments: