What does Bob Brinker have in common with David Kostin, Barry Knapp, Dan Chung, Richard Bernstein, David Bianco, Abby Joseph Cohen, and Bob Doll?
The answer is they are all bullish as 2010 ends and we enter 2011 but Bob Brinker is the least bullish of these experts.
Honeybee reported on Sunday (Dec. 26, 2010) Bob Brinker's current market outlook:


With the S&P500 currently at 1,258.51 (Quote and chart), low 1300s is not much of a reach.  Others are going more out on a limb with predictions of mid 1400s to 1500!
In the comments section of the same article, sivbum summarized the targets for other gurus:
You have to take what they say with a grain of salt, Honeybee also reported:

Interesting to compare what Brinker was saying three years ago before the market dropped over 57%:

Bob Brinker's "One Book to read over the holidays"
This weekend Bob Brinker said that if he had to pick one book to recommend reading from all the guests he had on the show this year it would be Andrew Sorkin's book Too Big to Fail: The Inside Story of How Wall Street and Washington Fought to Save the FinancialSystem--and Themselves

Brinker said Sorkin's book provides a comprehensive view of what happened to the financial system in the meltdown and the players involved.

Product Description:
A brilliantly reported true-life thriller that goes behind the scenes of the financial crisis on Wall Street and in Washington.

"In one of the most gripping financial narratives in decades, Andrew Ross Sorkin-a New York Times columnist and one of the country's most respected financial reporters-delivers the first definitive blow- by-blow account of the epochal economic crisis that brought the world to the brink. Through unprecedented access to the players involved, he re-creates all the drama and turmoil of these turbulent days, revealing never-before-disclosed details and recounting how, motivated as often by ego and greed as by fear and self-preservation, the most powerful men and women in finance and politics decided the fate of the world's economy."
Later in the show, Bob had on the show  Barbara Weltman editor of the J K Lasser tax guides:
One caller to Sunday's show said the middle class continues to fall behind, losing ground to the rich. He said the rich are getting richer. In response to the caller, Bob Brinker said high income people should be thrilled with the bill. At the start of the show Brinker sounded pleased when he reported that the new tax law was finally enacted for the next two years. Brinker's one complaint for the new tax bill was saying he didn't think capital gains should be taxed at all.
Posted by Kirk Lindstrom at 7:52 AM No comments:

Email ThisBlogThis!Share to TwitterShare to FacebookShare to Pinterest
Labels: Books

Vanguard GNMA + Cash Reserves Advice
Vanguard's web site says their GNMA fund (VFIIX quote & Charts) will go "ex dividend" on Dec. 29 with a 23¢ payout. If you are using "Bob Brinker's GNMA Advice to use a Stop Loss" to protect yourself from high net asset value loss, then you should reduce your stop price to account for this distribution.


Current Quote for VFIIX
As many regular readers if this blog know, I sold my GNMA fund awhile ago and bought TIPS and iBonds. I also sold all my bond funds not indexed to inflation. I put the remainder of my "fixed income money" in short term savings accounts that earn 1% or more. I have no reason to take bond fund risk until the Federal Reserve "normalizes" interest rates.

Some people need the income but I tell my subscribers there is a better alternative. I recommend selling SOME of your appreciated stocks or funds when you do your annual rebalance then use some of the profit taking cash for spending over the next year. Put the money into a savings account to use during the year to replace the income from bond interest and dividends. My explore portfolio is up 17.9% YTD so I've already taken significant profits.

I currently have the bulk of my fixed income cash at HSBC Bank and StarOne Credit Union. They both just dropped rates so I am leaning towards moving some of the money to American Express for 1.30%. For details, click "Learn More" here. If you hear of a large bank paying a better rate for short term savings, send me an email with the details.

This is what I sent my newsletter subscribers earlier today:

I moved my explore portfolio cash reserves from Schwab, where I was earning 0.25%, to American Express Bank where they are paying 1.30% APY.

If you have significant funds in a retirement account at Vanguard's prime money fund and don't want to move to another institution, then  I suggest making a ladder of CDs with Vanguard's CD Ladder tool.  Divide the funds into 5 buckets. Keep 1 bucket (20%) in Prime money fund ready for any buying opportunities or potential rebalancing, then put the remaining 80% into CDs for 3, 6, 9 and 12 months.  As the 3,6 and 9 month CDs mature, buy a new 1-YR CD.  After 9 months, you will have four one year CDs with one maturing every quarter.  When interest rates normalize, you can put the CD funds into the total bond fund again.

You can get an idea what different banks are paying for CDs and savings accounts for various amounts by using the rate tool here.  I use American Express because it is available to everyone and it is "too big to fail."  You can often find better deals with more restrictions such as the 1.3% at Capital One plus 10% bonus and up to $60 credit detailed here, but you have to be a member of Costco.

For reporting simplicity, I have enough to calculate already, I will keep my core portfolios fixed income in Vanguard's prime money fund knowing it is a slight drag on my reported performance compared to the above CD ladder strategy.

The difference between 1.30% at American Express and 0.06% at Vanguard is $1,240 per $100,000.  Thus it is worth the trouble if you have significant money in fixed income you don't want exposed to rising rates in the bond market.

For anyone still holding TEFQX or QQQ per Bob Brinker's advice to purchase these securities in 2000 before the market melted down, this one is for you.

Bob Brinker's dancing is similar to his advice. He gave aggressive "off the books" advice to buy QQQQ and TEFQX back in 2000 that worked out poorly. Clients in his money management company, the BJ Group, had no choice and all portfolios were put into the NASDAQ100 before it crashed. Brinker likes to advertise his "model portfolio" results that stayed mostly in cash but we know better. Brinker has "danced" around questions about this advice ever since. 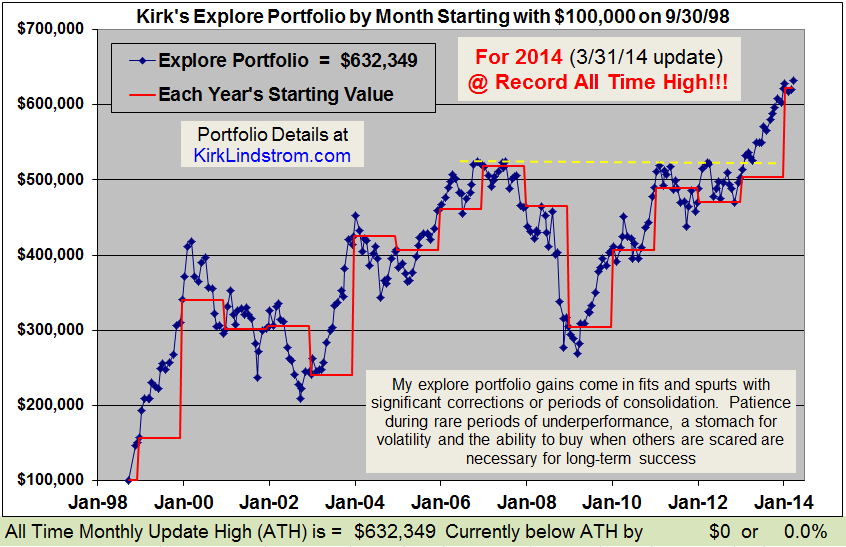 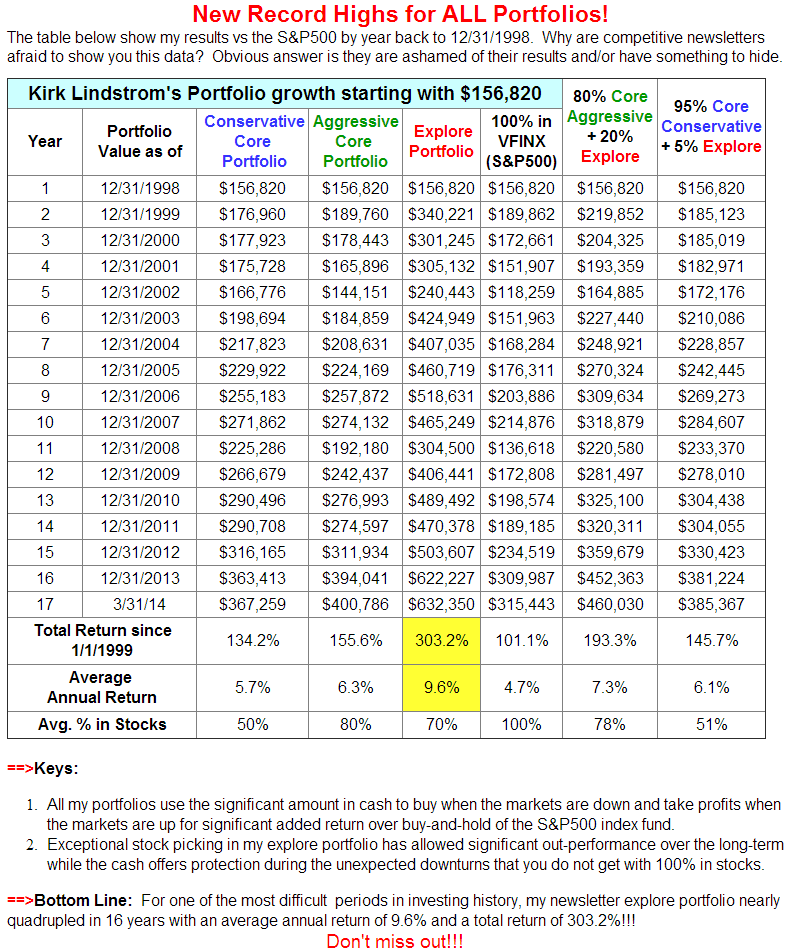 Posted by Noodles at 8:09 AM No comments: