Bob Brinker on Price of Oil vs Inflation

Inflation is the loss of purchasing power. Most people understand that higher prices mean you can buy less with a given amount of money but Bob Brinker says otherwise.

"We have kept you informed what is really going on in the world of inflation, which is virtually nothing. As you know, oil prices have skyrocketed and are now setting up near all time highs in the low $70s. Oil prices literally going through the roof, and yet to the consternation of many, not listeners to Moneytalk, but to many, including, apparently, the Fed Chairman, they think oil prices are inflationary. That's because they don't understand, they don't understand the taxing effect that these higher gasoline prices have on your pocketbook.

As we've discussed on the program, the vast majority of people in America today cannot even afford to fill up their gas tank. They can't put the $40, $50, $60, $70 worth into their gas tank because they don't operate on a budget like that. Sure, there are some well-heeled that can do it and not care very much about it, but the vast majority of Americans cannot even afford a $40, $50, $60, $70 fill-up on a regular basis-they just can't afford it.

Perhaps Bob Brinker's listeners really cannot afford to fill their gas tanks but I see little difference between Brinker's low-income listeners paying more for gasoline or for rent. An increase in either gasoline or rent is inflationary because it is the total spending and how much you get for it, purchasing power, that matters. If the poor can't afford increases from inflation then they usually downsize their standard of living such as moving to a cheaper apartment, taking the bus rather than driving or eating cheaper food. Some will even get a second job to "make ends meet." The middle class usually saves less and those of us who can afford it, we might give less to charity or spend less on our luxuries. One thing remains constant, higher priced gasoline means we all can't afford what we could before unless we get a raise to compensate for higher prices.

Inflation is near 15-year highs. I have charted the price of Oil and Inflation between 1994. 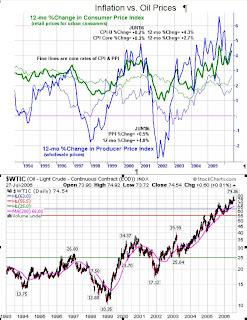 From the charts, you can see that the ups and downs for inflation seem well correlated with the price of oil. To argue otherwise seems rather foolish to me.

Bob, a "taxing effect" means you get less of something, not a sign change.

Posted by Kirk Lindstrom at 1:05 PM No comments: