If you are already on this list and you did not get your update, then check your junk mail and trash folders. Make sure you have TalkAboutMoney@gmail.com set as an "allowed sender" so your internet service provider (ISP) doesn't block our mass mailing to you as spam (yes, this happens.) You might have to call your ISP to find out how to add our email address to your allowed sender (this is NOT SPAM) list.

Subscribe NOW and get the February 2008 Issue of "Kirk Lindstrom's Investment Newsletter" for FREE! ! (more information)
Posted by Kirk Lindstrom at 7:31 AM No comments:

Yesterday Peter Brimelow reported that his "Bold Bulls are bloodied but unbowed." He says the bold bulls are all "shaken by the economy's deterioration, but still positive long-term."

Brinker said recently: "Marketimer views the establishment of a correction bottom as a process which unfolds over a given period of time. This process involves the initial establishment of a closing S&P 500 Index low, followed by a short rally, followed by a test of the area of the previously established low on reduced trading volume. The initial closing low in the current stock market correction process occurred on Jan. 22, when the S&P 500 Index closed at 1310.50. The market subsequently rallied for eight days, at which point it began the process of testing the area of the Jan. 22 closing low."

"In our view, the correction bottoming process has proceeded with a high degree of historical consistency to date. We have witnessed a decided reduction in selling pressure during the testing process, which is essential to a successful outcome. We now rate the stock market attractive for purchase on any weakness that occurs in the current area of the S&P 500 Index low 1,300s, or any minor weakness that occurs below that level."

Market timer's summary: "As has been the case with every correction since August of 2007, several stock market pundits are claiming that a bear market is underway. We do not believe this is the case. We expect the S&P 500 Index to work its way into record new high ground by late this year or in 2009."

"Any further testing of the area of the correction lows, which we expect to be close to the current S&P 500 Index level (1411), is regarded as an additional buying opportunity for subscribers looking to add to stock market holdings."

"Marketimer expects the S&P 500 Index to register new historic record highs as we move forward into next year."

Click image courtesy of stockcharts.com to see it full sized

Bob Brinker has recommended a fully invested position all this time so it is good news for bullish investors that Bob Brinker is still bullish for the long term.

Of the other two "bold bulls" Index Rx remains bullish like Brinker:

while Richard Band of "Profitable Investing" is defensive:

Visit our Facebook Bob Brinker Discussion Forum at "Investing for the Long Term" to ask questions or discuss this article.

Disclaimer: I own IBM with huge gains from a big buy back in 1994 at about $11 a share when IBM was having major problems since its 1987 peak much like we are seeing today for the NASDAQ100 technology index (QQQ) that remains down over 60% from its 2000 peak. I also have shares from the 1980s via a DRIP (dividend reinvestment plan) that have done very well overall despite the bad times between 1987 and 1994.

HURRY! Subscribe NOW and get the CURRENT Month's Issue for FREE!
(Just mention this article and I'll start your 1 year, 12 issue subscription with the next month's issue.)

Posted by Kirk Lindstrom at 7:15 AM

Building Permits down 3.0% vs down 7.1% in December. On a seasonally adjusted basis, building permits are running at a rate of 1.08M, the lowest reading since November 1991!

Slow single family housing means people need appartments to live in. Single-family housing starts fell by 5.2% in January, but starts on structures with two or more units rose by 22.3%.

Yesterday the National Association of Home Builders (NAHB) reported that the mood of U.S. homebuilders improved slightly for a second straight month. The NAHB reported their home builders' housing market index rose to 20 in February from 19 in January.

==>Highest Yield CDs with FDIC <==
Visit our Facebook Bob Brinker Discussion Forum at "Investing for the Long Term" to ask questions or discuss this article.
.
Posted by Kirk Lindstrom at 5:35 AM

Operating and Actual Earnings Estimates for 2008

One potential flaw in Bob Brinker's Long Term Stock Market Timing Model is he looks at operating earnings which ignores the write-offs. Many companies use write-offs as part of their business model. That is they make a ton of money in the good years then in the bad years they lay off staff and get out of marginal businesses and "write off the costs" to lay people off and exit business.

Each month in "Kirk Lindstrom's Investment Newsletter" I update the page I call "Fed Model Update." The “Fed Model” refers to a simple model the Federal Reserve uses which compares the earnings yield of the S&P500 with the 10-year Treasury bond. The model says the stock market is over valued if the earnings yield (defined as the total earnings of the S&P500 divided by its price) is lower than the yield of 10-year Treasury bonds, currently yielding 3.77%.

Below is my comparision for this month. Note how the year-0ver-year estimate for operating earnings growh is a whopping 18%.

Fearful investors won't get too excited about the market until it starts to look past the write-offs that have crushed GAAP earnings.

The bad news bears think the decline in earings is only starting while bulls like Bob Brinker believe we are having a temporary downturn in earings like we saw in early 2003 before we resume earings growth.

Visit our Facebook Sentiment Forum at "Investing for the Long Term" to ask questions or discuss the data.

I have been charting this data since 1998. A spike on my charts of "Investors' Intelligence (II) Bull Bear Survey data" is lower than the March 2003 spike and about equal to the July 2006 spike. ALL spikes this low or lower led to significant rallies of several months or more, including the spike in 2001 and the 20% correction in 1998.

I just updated the charts for "II vs DIJA" and "II vs S&P500" at Investors' Intelligence Sentiment Indicator where I have graphs of the bulls over bulls minus bears and the four week moving average of that data charted back to 1998.

Visit our Facebook Sentiment Forum at "Investing for the Long Term" to ask questions or discuss the data.

Posted by Kirk Lindstrom at 6:51 AM

Email ThisBlogThis!Share to TwitterShare to FacebookShare to Pinterest
Labels: sentiment

Bob Norton has udated the "Bob Brinker Shadow Long Term Stock Market Timing Model" and reports it "remains in favorable territory as we move into February, 2008."

This is a "A Special Report" by Bob Norton for Bob Brinker Fan Club readers. You can read the whole report here. 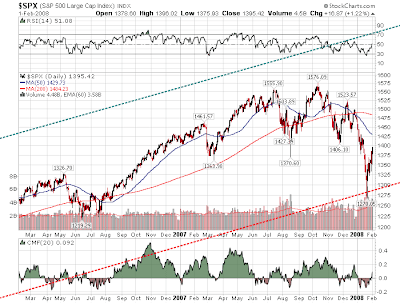 This is a "A Special Report" by Bob Norton for Bob Brinker Fan Club readers. You can read the whole report here.

Read Bob's full report to see if you agree with his conclusion and update on the four basic model indicators:

Then give Bob your feedback on this in our Bob Brinker Free Discussion Forum at facebook's "Investing for the Long Term" group.

If you want updates on what Brinker is saying on Moneytalk delivered to your email box, often within 24 hours after Sunday's show, then follow the instructions at the Bob Brinker Fan Club.