Last weekend a caller asked Bob Brinker if he still felt California General Obligation Bonds he recommended in the past were good, safe investments or if she (the caller) should sell them.
Brinker's reply was


"That's a personal decision, Pamela. I really can't tell you what to do with your bonds. I have some California bonds, but in almost all cases my bonds might be different than your bonds and I'll tell you why. The bonds that I own have Treasuries behind them. In other words, they've been pre-refunded by earlier transactions by the state and backed by Treasuries. So in almost all cases, the California bonds that I own are actually backed by Treasuries and are not backed by the State of California....."

I looked up what "pre-refunded" means. It simply means Brinker's bonds will be "called" so he will soon get his money back. It is similar to refinancing your home mortgage where the borrower will get a better rate and you have to invest your cash now at very unattractive interest rates. For example, Vanguard's Prime Money Market Fund is only paying about 2.43% these days.

If they were called away, then Brinker won't get the interest rate he thought he would get for the full term when he bought the bonds. Brinker will get his money back early and will have to reinvest the money, perhaps at much lower rates than had he bought a CD. Brinker 's audience probably could have done much, much better locking money into CDs (CD Rate Survey) which are not callable so they get the good rates for the full term.

Callable Bond: A condition of a bond permitting the issuer to redeem it before maturity on specified dates at specified prices.

Pre-Refund: Bonds that will be called on the stated call (pre-refunded) date. The monies used to call the bonds are on deposit in an irrevocable escrow account from the proceeds of a more recent bond issue from the same issuer. Bonds are pre-refunded in order to take advantage of the lower interest rates, thus lowering the issuer's interest expense.

Call Risk: For a REMIC, the risk that declining interest rates may accelerate mortgage loan prepayment speeds, causing an investor's principal to be returned sooner than expected. As a consequence, investors may have to reinvest their principal at a lower rate of interest.

I don't know why Brinker did not say his bonds have been called and he will get his money back early or he sold his CA GO bonds to buy this safer investment. Maybe he didn't want to admit his advice to buy them turned out to be poor compared to buying CDs of the same term. It would be a good lesson on why buying bonds has risks not often mentioned.

The very low treasury rates for short term monies could be from demand from states like CA buying short term treasuries to "pre-refund" the debt they refinance at lower rates.
I also don't know why he refused to answer the caller and give a recommendation for the bonds she owned if they were not called.

With rates so low, banks will try to sell you their annuity products. Make sure you read my article:

Merry Christmas, Happy Hanukkah to all!!

Posted by Kirk Lindstrom at 8:10 AM 3 comments:

Email ThisBlogThis!Share to TwitterShare to FacebookShare to Pinterest
Labels: Definitions

I found this cartoon on another message board.

Here's another one pointing out the perils of trying to catch a bottom in this market ..... 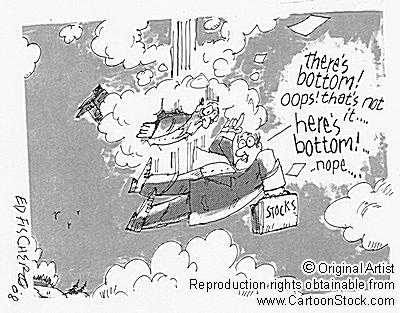 I am sure Bob Brinker followers can relate given the bottoms Brinker has called as shown on this graph. 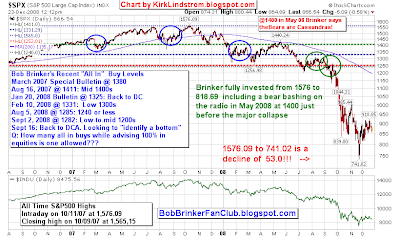 Here is hoping you can beat the chimp throwing darts at the Wall Street Journal next year. 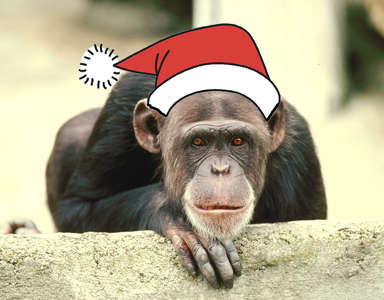 With rates so low, banks will try to sell you their annuity products. Make sure you read my article:

Posted by Kirk Lindstrom at 9:07 AM No comments:

Four of five newsletters on Honor Roll are bullish...

So it behooves us to pay attention to what they are saying.....

You might still object, on the grounds that this same exercise a year ago also reached a bullish conclusion, and yet the stock market is some 40% lower today.

It is a valid objection. Hulbert's methodology of following writers he thinks are the "best market timers" was 100% wrong this year.

See my discussion of Mark Hulbert's November 15, 2007 article: Bob Brinker Still Bullish According to Mark Hulbert where I reported:

"Bob Brinker remains bullish along with the other eight top market timers Mark tracks. The best news is the worst market timers are bearish."

"Bob Brinker's Marketimer: Bullish. In his most recent issue, which was published in early November (2007), editor Bob Brinker writes: "We continued to believe that there is no risk of a cyclical bear market (a decline of 20% or more as measured by the S&P 500 index) in the months ahead ... We expect the stock market to set a series of new record highs into next year." His model portfolios are fully invested."

As you know, Brinker followed this forecast up with a "gift horse buying opportunity" in the mid 1400s. 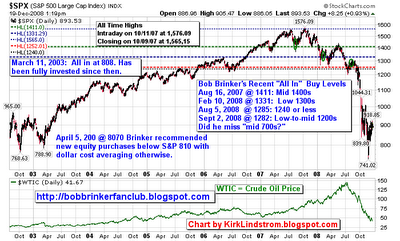 Click chart courtesy of Stockcharts.com for full size image
This is what Hulbert says now:

Bob Brinker's Marketimer. This newsletter makes it onto this year's honor roll even though editor Brinker last year did not expect the stock market to decline more than 20%. That he nevertheless remains on the Honor Roll is testament both to how good his market calls have been on other occasions over the past 18 years, as well as to the failure of most other newsletters to also anticipate the severity of the market's decline. He was in good company, in other words, and the Honor Roll is graded on the curve.

Brinker currently believes the stock market is in a perhaps extended bottoming process, and he therefore recommends that subscribers invest in the stock market on a dollar-cost-averaging basis. "We are aware that there is widespread fear that financial Armageddon is the likely outcome of the global financial crisis. We take the opposite view, and expect the stock market to record significant gains during the next major market uptrend. We continue to focus our efforts on the ongoing bottoming process that we regard as essential to establishing the level from which a sustainable market uptrend can occur. When we reach the point at which we can upgrade our current stock market view from dollar-cost-average to a renewed buy recommendation, we will do so."

Brinker has had a lot of practice calling these bottoms! With the market reecently up 20% off the recent low on more than one day, he missed one. 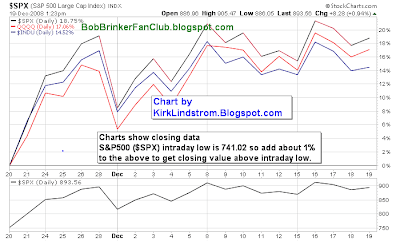 Click chart courtesy of Stockcharts.com for full size image
Not to worry about missing bottoms, Bob Brinker has been fully invested since March 2003 . He recommended against taking profits at the top so he has taken a round trip. The other market timers Hulbert follows must be putrid if Brinker's results are the best of the lot.

I posted the full story yesterday on my blog, "Kirk's Market Thoughts"

Regulators have not yet verified the scale of the fraud. But the criminal complaint filed against Mr. Madoff on Thursday in federal court in Manhattan reports that he estimated the losses at $50 billion. “We are alleging a massive fraud — both in terms of scope and duration,” said Linda Chatman Thomsen, director of the enforcement division at the Securities and Exchange Commission. “We are moving quickly and decisively to stop the fraud and protect remaining assets for investors.” 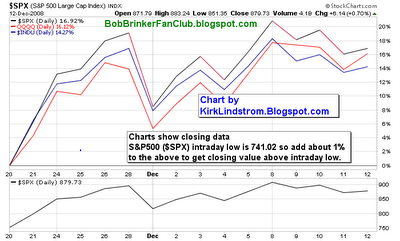 Posted by Kirk Lindstrom at 1:43 PM No comments: 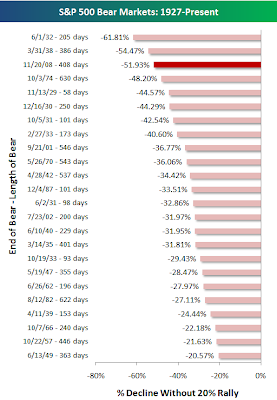 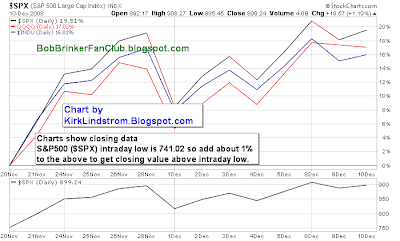 New=>US Treasury Rates at a Glance

Gulf Oil CEO says gas could hit $1 next year: On Wednesday, Gulf Oil CEO Joe Petrowski said that the price of oil could sink to $20 per barrel, and there is a chance gasoline prices could drop as low as $1 per gallon by early next year. Petrowski said speculators drove oil prices up and there is a chance that the market will overshoot on the way back down, resulting in much lower prices at the pump than we have now. 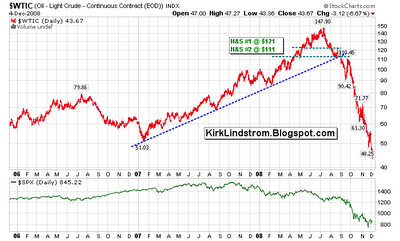 Here we see oil having closed the week at an all-time-record-high, close to $145 for a barrel of oil………..And there is an inverse relationship that has developed between upward spikes in oil prices and the stock market, and that inverse relationship has really been showing up now for some time.

Now why is there this correlation – we see the S&P 500 sitting in in the 1240 area. We see the Dow sitting in at 11,100 area. We see the Nasdaq Composite trading in the 2200’s. Why is there this correlation between the price of a barrel of oil and what goes on in the stock market? I think the answer to that question is easy, and that is consumers, wind up with less money to spend when they get pounded with these higher costs of energy, costs of gasoline, all the products in the energy complex. And that weakens the status of the consumer and also delays the potential for economic recovery.

"The stock market wants to see an economic recovery scenario. It does not want to see an increased oil price scenario, which is was it’s seeing right now. Now I wish I could tell you what the price of oil is going to be in a week, a month, a year. I don’t know. I have no way of knowing and I think only a fool would try to forecast the price of a barrel of oil in the world we live in…….”

The price of oil AND the stock markets have crashed so the "inverse relationship" is not valid at all. 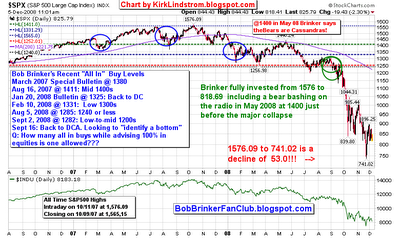 What Brinker said in June was nonsense and is nonsense today as the clear link between economic growth and the price of oil demonstrates.

High oil prices were due to booming global economies creating huge demand with speculators piling on to push prices higher. This was not rocket science but simple economics of supply and demand.

Likewise, today we are plunging into a global recession with many fearing depression. Obviously the demand for oil is plunging which leads to plunging oil prices.
Now the market is at:

I think only a fool would try to forecast the price of the stock market in the world we live in…….

I am not holding my breath. It is very hard to sell a newsletter called "Marketimer" when your market timing has you wildly bullish with a "gift horse buy" in the mid 1400s just before the biggest market crash since the Great Depression!

Posted by Kirk Lindstrom at 7:50 AM 3 comments:

The State Bank of India, with FDIC insurance at its US Branches in New York City and Chicago, has a 6-month CD with a 4.32% annual percentage rate . This compares well with the 6-month US Treasury Rate of only 0.29%. Contact information here.

For long term, the top rate for CDs this week is 5.31% offered by Intervest National Bank for a 7-year certificate of deposit.

The table below shows the best CD rates for other terms.
"Highest CD Rate Survey + Current US Treasury Rates"

Make sure you read the article:

=>How to Get the Best CD Rates