“In our view, the S&P500 index has the potential to trade into the low-to-mid 1400s range in 2012. On a valuation basis, using our conservative operating earnings estimate of $101 for next year, a price/earnings multiple of 14 would enable the S&P 500 index to reach the low-to-mid 1400s level."


Brinker says: “We continue to rate the market attractive for purchase in the event the index returns to the area of the correction lows in the low-1100s. Above that range we suggest a dollar-cost-average approach for new stock market money.”

"All of his Marketimer model portfolios are fully invested."

Before anyone gets too excited, remember that in late 2007 and early 2008 Bob Brinker predicted the market would reach the 1600s and he issued a "gift horse buying opportunity" in the mid 1400s to take advantage of a correction.   See
Brinker has had his model portfolios one and two 100% in equities since March 2003!

, will be the guest host for "MoneyTalk with Bob Brinker." 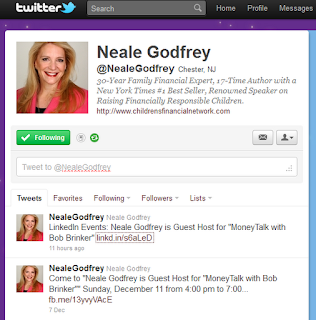 About Neale: Neale S. Godfrey is an acknowledged expert on family and children’s finances who has been in the financial field for more than 30 years. Early in her career, Neale became one of the first female executives at The Chase Manhattan Bank. Later, she became the president of The First Women’s Bank and founder of The First Children’s Bank. In 1989, Neale formed Children’s Financial Network, Inc., whose mission is to educate children and their parents to take charge of their financial lives. Neale is the author of 17 books that deal with money, life skills, and STEM education, and has been honored with a #1 New York Times Best Seller, Money Doesn’t Grow on Trees: A Parent’s Guide to Raising Financially Responsible Children.

She is on the Board of Directors of UN Women and sits on Governor Christie’s Task Force for Gender Parity. Neale is the proud mother of two amazing children and two incredible grandchildren.
Posted by Kirk Lindstrom at 8:05 AM 3 comments:

Hosley told KGO-TV, Channel 7,  "We thought that there would be a better opportunity to build audience by going to a semi-all news format.  Our talk format has been wonderful over the years for KGO, but the audience really hasn't stayed with us. The audience isn't there. We believe that news will attract more listeners."

We knew ratings were bad when they dropped Moneytalk from Saturday, but now Sunday afternoons will be hosted by Brian Copeland and Stacy Taylor.


Weekend talk
The weekend shows will remain partially intact.  Karel will remain 7-10 p.m. on Saturdays and Sundays. According to the station's online schedule, Pat Thurston will take over 8 a.m. to 11 a.m. on weekends.   Spencer Hughes takes over the 10 p.m. to 1 a.m. weekend slot that had been occupied by Bill Wattenburg, according to the station's Web site.   Wattenburg apparently among those who have been let go.   Wattenburg's Web page on the KGO site had been removed.

Bob Brinker's Moneytalk show, which had aired on Sundays at 1-4 p.m. is no longer on the station's schedule and neither is  Joanie Greggains.

Gene Burns' weekend Dining Around show has also been cancelled.

Joanie Greggains did a show about exercise and Gene Burns' show was about eating out, usually at fancy restaurants.  I guess Brinker's show did so poorly helping people make money that they couldn't afford to eat out and thus didn't need to exercise!

The good news for many is Ron Ownes, who was on weekdays from 9AM until Noon, will keep his popular, highly rated, show.


New Sunday schedule as of Dec 6: